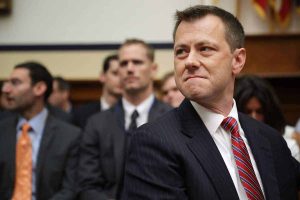 The subpoena–issued by House Judiciary Committee Chairman Bob Goodlatte (R-VA)–scheduled a joint hearing between the Judiciary and Oversight committees for July 10 at 10 a.m., however, it is unknown if Strzok will comply.

“Strzok’s attorney, Aitan Goelman, said on Monday that his client had retracted a previous offer to testify publicly. Goelman cited a closed-door interview on June 27 with the House Judiciary and Oversight Committees as evidence that Republicans were setting ‘a trap’ for the embattled FBI agent.

‘Having sharpened their knives behind closed doors, the committee would now like to drag back Special Agent Strzok and have him testify in public — a request that we originally made and the committee denied,’ Goelman said in a letter first reported by CNN.”

Last week, Strzok was interviewed in a closed-door deposition with House Judiciary and Oversight committee members where he was grilled for having sent numerous concerning text messages about Donald Trump to his paramour, former FBI attorney, Lisa Page. The interview disappointed many of the committee’s Republican members who felt they were left with unanswered questions. Chairman Goodlatte told Fox News last week that Strzok’s explanations of his anti-Trump text messages were “not believable”. Congressman Ron DeSantis (R-FL) said of the deposition, “It was a waste—Strzok is full of it and he kept hiding behind [the] classified information excuse.”