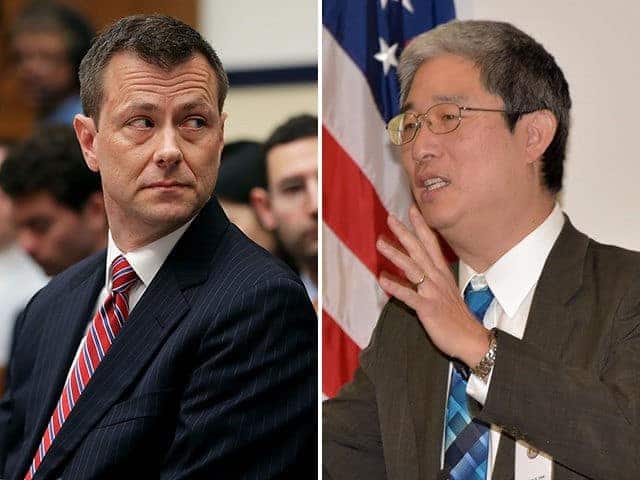 A law enforcement sensitive document written by senior Justice Department official, Bruce Ohr, is raising serious concerns amongst congressional investigators regarding testimony provided to Congress on the involvement of FBI special agents in the probe into the Trump campaign and its alleged Russian ties.

The more we learn about this, the more it seems like Bruce Ohr was a really key figure…

Strzok, who was the lead investigator in the FBI’s investigation into Trump, was removed last August from Special Counsel Robert Mueller’s investigation after the DOJ’s Inspector General discovered a barrage of anti-Trump text messages between him and Page. Page, who was working as the general counsel for now fired Deputy Attorney General Andrew McCabe, is no longer with the FBI.

Ohr was demoted twice by the Justice Department for his failure to disclose that his wife, Nellie Ohr, worked for the now-embattled research firm Fusion GPS, which produced the infamous anti-Trump dossier. The new document is only one in a series of notes commemorating his communications with dossier author, Christopher Steele, which have been obtained by the congressional oversight committees investigating the FBI’s handling of the Trump Russia investigation.

Another congressional investigator told SaraACarter.com that the notes written by Ohr raise “concerns of previously undisclosed communications with the FBI and Ohr and how extensive these communications were. It also raises concerns about testimony given by Lisa Page, who downplayed her interactions with Ohr in her (July 13) testimony to Congress.”

The notes at the bottom of the memo state, in sloppy writing, “no prosecution yet, pushing ahead on M case,” in reference to Paul Manafort, who is now facing years old charges on financial crimes and money laundering, according to congressional investigators.

Ohr also stated, “may go back to Chris,” in reference to Christopher Steele.

“The more we learn about this, the more it seems like Bruce Ohr was a really key figure in this circle comprising those both outside and inside the government who were colluding with each other to manufacture the Trump-Russia investigation,” said a third congressional staffer involved in the Russia investigations.

In a separate, but related matter, a slew of documents and emails obtained by congressional investigators also shows that the FBI failed to disclose to the Foreign Intelligence Surveillance Court (FISC) that it had a backchannel investigation with senior Obama Justice Department officials that continued to use and obtain information from Steele.

Steele was a central figure in the separate investigation being conducted by Ohr and Fusion GPS. According to the documents, Ohr and his wife were working closely with Steele and channeling information to the FBI.

The new onslaught of documents obtained by the oversight committees seems to show a pattern, considering the FBI also failed to disclose important information in its FISC warrant application to spy on short-term Trump campaign volunteer, Carter Page.

On Monday, House Intelligence Committee Chairman Devin Nunes revealed that Obama’s FBI failed to include “exculpatory evidence” in its FISA application against Page. If proven true, this violation has enormous implications, according to a congressional source with knowledge of the investigation.

“Ohr was basically allowing himself to be run as a source so the FBI could communicate with Steele even after they fired him,” said another congressional source who maintains that the exculpatory evidence should have been included in the application and the court should have been aware.

ABOUT US
Sara A. Carter is a national and international award winning investigative reporter whose stories have ranged from national security, terrorism, immigration and front line coverage of the wars in Afghanistan and Iraq.
Contact us: support@thesaracartershow.com
FOLLOW US
© 2019 Sara A. Carter | All Rights Reserved.
130shares