Border Patrol: Nearly 1,000 migrants are crossing into US undetected per day 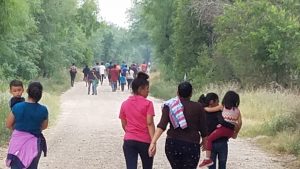 A new Washington Post report finds these migrants are getting past because agents are preoccupied with families and unaccompanied children, as well as an increasing amount of males entering the country.

Border agents told the Post under anonymity that the number of “get aways” has increased and is at the highest rate in recent memory. The term is defined as “an individual who is not turned back to Mexico or apprehended, and is no longer being actively pursued by Border Patrol.”

While hard to get an accurate count of “get aways,” the agency has spent nearly $1 billion on new technologies to detect entries, the Post reports.

“When migration levels surge, as with the current influx, border agents spend significant amounts of time transporting and processing families and unaccompanied minors, who generally do not attempt to evade capture, turning themselves in and seeking humanitarian refuge in the United States,” the article reads.