Sara Carter
Border Patrol agents round up hundreds of illegal immigrants crossing this past week from Mexico into the Rio Grande Valley sector. BP agents say they are overwhelmed and are concerned that Washington D.C. politics and partisan fighting will fail to find solutions to the crisis.

Along the Texas Rio Grande Valley River border with Mexico the number of illegal migrants crossing into the United States this past week is overwhelming resources and law enforcement. Many of the Border Patrol agents working in the region describe the flow of illegal migrants as a faucet without a shut-off valve and several off-duty agents returned to areas they frequently patrol to show SaraACarter.com to just how bad it’s getting.

This reporter was speaking to the agents as they drove their vehicle to an area near the Rio Grande Valley River that traffickers use to move people, narcotics and other contraband. Less than ten minutes after the off-duty agents arrived they spotted groups of illegal migrants walking down a dirt road. Women, children and men with more lagging behind them and more groups in front of them looking for Border Patrol agents they could turn themselves into without fear of being deported back to their homelands.

These migrants have already been told to apply for asylum so they are not afraid of law enforcement, the agents say. Instead, they welcome the idea of being one-step closer to their goal of being released from custody.

The off-duty officers began video taping and taking photos as the situation unfolded, saying “it’s only going to get worse if nothing is done to stop it.” More so, then officials warn that  politicizing the border crisis and the backroom fighting between Democrats and Republicans is putting the nation in a precarious and dangerous situation.

Those same sentiments were echoed Friday at a House Oversight and Reform committee hearing.  The lawmakers, local and federal law enforcement officials noted that the flow of immigrants is only compounded by the growing trafficking of dangerous narcotics from Mexico into the United States.

The hearing focused on President Donald Trump’s administration’s response to the opioid crisis, as well as the flow of Heroin into the country by powerful drug cartels that seized control of the border towns in Mexico. Tragically, the flow of Fentanyl – a powerful synthetic opioid that is similar to morphine but is 50 to 100 times more potent – has presented a serious national security threat to nation.

The committee posted on Twitter part of the hearing. They warned that the Fentanyl seizures over the past year is enough to kill “more than the population of Ohio, Michigan, Wisconsin, Pennsylvania, Indiana, Minnesota, and Iowa. COMBINED.”

We have a crisis on our southern border. pic.twitter.com/XCS6lYYNEd

“We need to secure our southern border,” said Sheriff Wayne Ivey, who stated that the three pounds of Fentanyl his office seized was enough to kill everyone in his county. “We will eliminate and eradicate a lot of problems that law enforcement faces each and everyday.”

Ivey added, “this epidemic has no boundaries and does not discriminate.”

Shortly before the hearing, Committee members held a roundtable where they heard from families who have lost loved ones to the crisis. 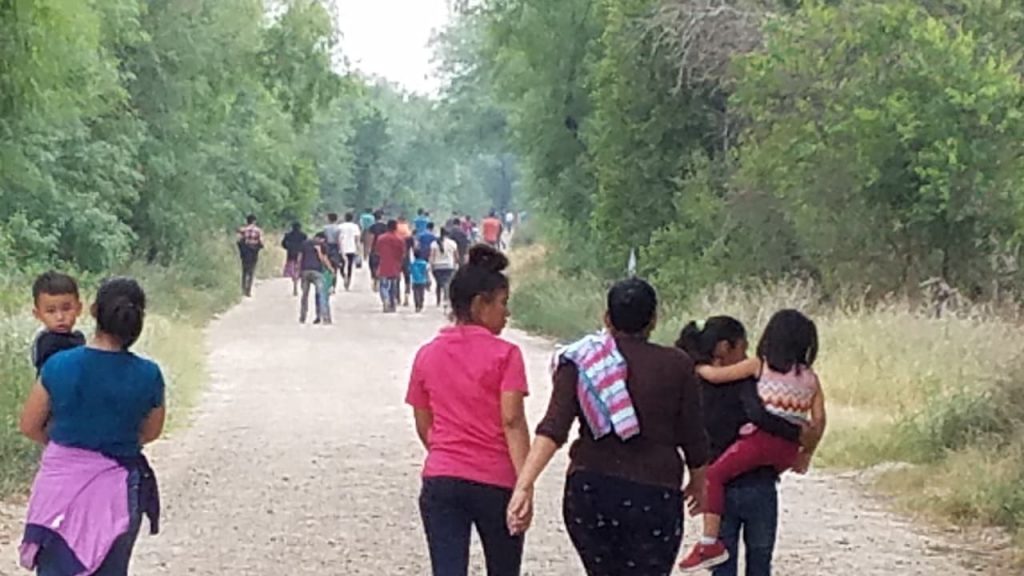 It’s not just the Rio Grande Valley. It has been the same this in Arizona’s Yuma sector and in other familiar crossing points along the roughly 2,000 mile porous border with Mexico.

“We haven’t seen anything like this,” said one off-duty Border Patrol agent, who sat along the riverbed watching droves of family units and men making their way across the rugged terrain and into the country.

“Agents are getting pissed,” the Border Patrol Agent added. “There’s no care for our safety, and no plan to make things better.”

The flow of large groups has been so consistent and at times exceeding more than 200 people at any given time in the Rio Grande Valley sector. In fact, Border Patrol officials have brought in port-a-potties to assist the migrants who are waiting at specific crossing points, as they wait to be transported to CBP processing facilities in the area.

CBP tweeted this week that it is “experiencing an unprecedented and unsustainable situation at the Southwest border.”

The agency noted that in just the first seven months of the 2019 fiscal year beginning in October, the number of border apprehensions has been greater than in any full year since 2009.

As of Sunday, only 7 months into the fiscal year, #BorderPatrol has surpassed the TOTAL Southwest border apprehensions of every fiscal year since 2009. pic.twitter.com/h943SSfjar

In Rio Grande Valley alone it’s not just Central Americans and Mexicans being apprehended but people from all over the world. In the past few days, Cubans, people from Bangladesh, India and possibly Pakistan were also rounded up by Border Patrol agents. The agents admit that it’s difficult to say for certain where some of the migrants are from because most don’t carry any paperwork or identification with them when they make their way into the U.S.

“It’s strategic for them not to have identifiers,” said an Immigration and Custom’s Enforcement (ICE) officer, who spoke off the record as they were not authorized to speak to the media. “If they don’t carry anything it makes it harder for us to identify them and return them. But it doesn’t seem to matter much now since almost everyone is applying for some type of asylum.”

Further complicating matters, say officials is growing numbers of children crossing the border with adults that claim to be their parents or guardians. Again, there is no paperwork to accurately identify the families “and without paperwork or identification it’s difficult to prove if these are actually the parents or guardians of the children,” said a DHS official, who is concerned for the safety of the children being dragged on the dangerous journey.

The Pentagon reported this week that it is shifting $1.5 billion in funds originally targeted for support of the Afghan security forces, along with other projects to assist in the construction of nearly 80 miles of border wall fencing, reported the Associated Press.

“It’s a start,” said an ICE official, who works along the Southern border with Mexico. “But it’s only a start – there must be a multi-faceted solution to this problem and the immigration laws need to be enforced and some of them need to change.”

According to the Associated Press Congress was notified Friday about the Pentagon’s decision. As of March the military decided it will transfer $1 billion from Army personnel budget accounts to support wall construction.

The funding will now give $2.5 billion allocated for Trump’s national emergency at the border.  It won’t be easy. Remember, Trump had to veto Congress’ attempt to reverse his emergency declaration this year.