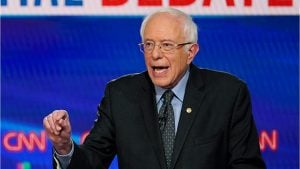 Sanders’ remarks come after a Trump advisor told Fox News on Sunday that the former president plans to return to “social media in probably about two or three months here, with his own platform”.

RELATED: Trump to return to social media on ‘his own platform’ in 2-3 months

Appearing on the “The Ezra Klein Show” podcast, the democratic socialist said that Trump was “a racist, a sexist, a homophobe, a xenophobe, a pathological liar, an authoritarian, somebody who doesn’t believe in the rule of law,” when asked if he thinks “there is truth to the substantive critique […] that liberals have become too censorious and too willing to use their cultural, and corporate, and political power to censor or suppress ideas and products that offend them”.

However, Sanders added that he didn’t “feel particularly comfortable” about the former president not being able to “express his views on Twitter”.

In January, Twitter permanently suspended Trump’s widely followed account after a mob of his supporters violently stormed the U.S. Capitol, with the company citing a “risk of further incitement of violence”. Likewise, sites such as Facebook, YouTube, and others also suspended the then-president’s accounts.

The senator continued, saying that social media sites should not permit “hate speech and conspiracy theories” on their platforms and that the World Wide Web should not be used for “authoritarian purposes and insurrection.” Despite this, he admitted that he didn’t have an answer for how to balance free speech and combatting online hate acts.

“Yesterday it was Donald Trump who was banned,” Sanders added, “and tomorrow it could be somebody else who has a very different point of view.”

“I don’t like giving that much power to a handful of high tech people,” he also told host Ezra Klein, “but the devil is obviously in the details and it’s something we’re going to have to think long and hard on, and that is how you preserve First Amendment rights without moving this country into a big lie mentality and conspiracy theories.”