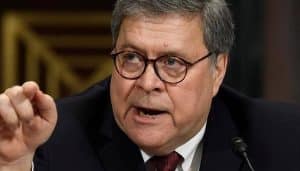 Department of Justice Attorney General William P. Barr is advising President Donald Trump to “assert executive privilege” in an effort to protect documents related to the administration’s decision to add a citizenship question to the 2020 Census. He made the request of Trump, as Democrats with the House Oversight Committee move forward to hold Barr in contempt tomorrow morning, the Justice Department letter from Assistant Attorney General Stephan E. Boyd revealed Tuesday.

Boyd advised House Oversight Committee Chairman Elijah Cummings to “hold the subpoenas in abeyance and delay any vote on whether to recommend a citation of contempt for noncompliance with subpoenas, pending the President’s determination of this question.”

Democrats on the committee plan to vote Barr and Commerce Secretary Wilbur Ross in contempt early Wednesday for what they say is a failure to comply with congressional subpoenas that required them to turn over documents requested by Cummings.

Cummings is pursuing the contempt vote, despite the fact that the Department of Justice  has provided thousands of documents, as well as requested information to Congressional committees. In fact, the DOJ’s response to House Oversight and Reform Committee Cummings Wednesday laid out exactly how much has already been provided to his committee.

Boyd added “regrettably, the committee has made this request necessary by threatening to abandon the constitutionally mandated accommodation process between the branches and to hold a vote on contempt tomorrow morning.”

Moreover, the DOJ noted that the committees request to interview two administration officials without counsel present is in violation of the President’s “constitutional authority to control the disclosure of privileged information and to supervise the Executive Branch’s communications with Congress.”

“Congressional subpoenas that purport to require agency employees to appear without agency counsel are legally invalid and are not subject to civil or criminal enforcement,” stated the DOJ’s response to the committee.

On eight separate occasions from Feb. 25 to May 24, the DOJ provided the requested documents respectively to Cummings. Barr’s office also made two senior officials available for transcribed interviews by the committee staff, according to the DOJ.

Further, DOJ officials stated that the department has also “identified tens of thousands more responsive documents that it is in the process of producing.”