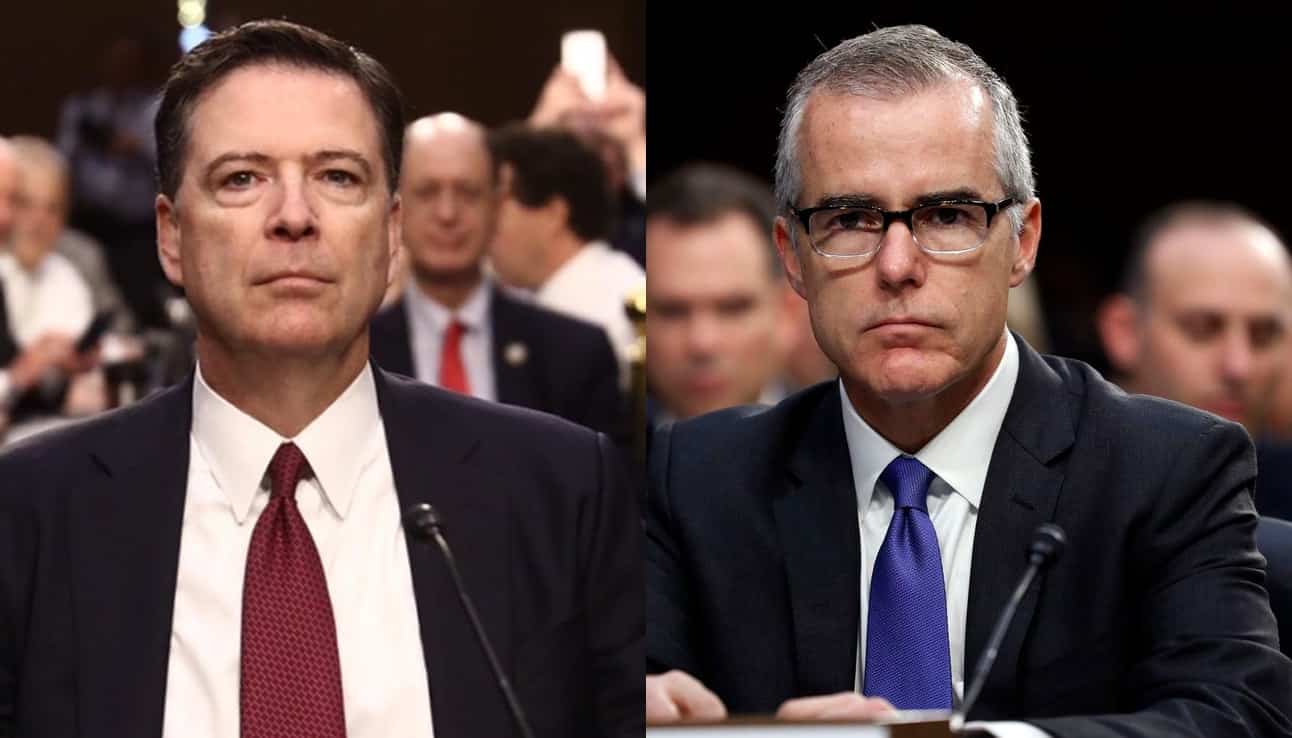 Judicial Watch announced today it obtained a two-page memo, dated May 16, 2017, by then-Acting FBI Director Andrew McCabe detailing how then-Deputy Attorney General Rod Rosenstein proposed wearing a wire into the Oval Office “to collect additional evidence on the president’s true intentions.” McCabe writes that Rosenstein said he thought it was possible because “he was not searched when he entered the White House.”

The memo, which is redacted in key sections, purports to serve as a “contemporaneous recollection” of a meeting that day (“12:30 pm on 5/16/2017”) in Rosenstein’s office. The meeting included Rosenstein, Deputy Assistant AG for Intelligence Tashina Gauhar and Principal Associate Deputy Attorney General Jim Crowell in Rosenstein’s Justice Department office. McCabe writes he began the meeting by telling Rosenstein that he “approved the opening of an investigation of President Donald Trump … to investigate allegations of possible collusion between the president and the Russian Government, possible obstruction of justice related to the firing of FBI Director James Comey, and possible conspiracy to obstruct justice.”  In justifying his investigation, McCabe refers to the memos Comey secretly wrote on meetings he had with President Trump and an NBC interview with Lester Holt.  McCabe writes he “informed DAG [Rosenstein] that as a result of his role in the matter, I thought he would be a witness to the case.”

Rosenstein responded by recounting his discussion with President Trump, then-Attorney General Sessions and then-White House Counsel Don McGahn about Comey’s imminent firing and that President Trump wanted him to write a “memo explaining the reason” for Comey’s firing.

The full text of the redacted McCabe memo is printed below:

At 12:30 pm on 05/16/2017, I met with Deputy Attorney General (DAG) Rod Rosenstein in his office at the Department of Justice. Also present were Tashina Gauhar and Jim Crowell. The following is a contemporaneous recollection of the main topics we discussed.

I began by telling him that today I approved the opening of an investigation of President Donald Trump. I explained that the purpose of the investigation was to investigate allegations of possible collusion between the president and the Russian Government, possible obstruction of justice related to the firing of FBI Director James Comey, and possible conspiracy to obstruct justice. The DAG questioned what I meant by collusion and I explained that I was referring to the investigation of any potential links between the Trump campaign and the Russian government. I explained that counterintelligence investigations of this sort were meant to uncover any existence of any threat to national security as well as whether or not criminal conduct had occurred. Regarding the obstruction issues, I made clear that our predication was based not only on the president’s comments last week to reporter Lester Holt (that he connected the firing of the director to the FBI’s Russia investigation), but also on the several concurring comments the president made to Director Comey over the last few months. These comments included the President’s requests for assurances of loyalty, statements about the Russia investigation and the investigation of General Michael Flynn. I also informed the DAG that Director Comey preserved his recollection of these interactions in a series of contemporaneously drafted memos. Finally, I informed the DAG that as a result of his role in the matter, I thought he would be a witness in the case.

The DAG then related his experiences at the White House on Monday, 05/08/2017. He began by stating that he had the feeling that the decision to fire the Director had been made before he arrived. At the White House, he first met with White House Counsel Donald McGahn, who told him that the President had drafted a letter to Director Comey that McGahn did not want the President to send. Shortly thereafter they met with the President and Attorney General Jeff Sessions, and possibly others, in the Oval Office. President Trump told the DAG he had written a letter to Director Comey, asked the DAG if he had seen the letter, and instructed McGahn to provide the DAG with a copy. The DAG described the letter to me as being a long list, possibly several pages, of the President’s complaints with Director Comey. Among those complaints was a discussion about the FBI’s Russia investigation, as well as a paragraph about the FBI Deputy Director. The DAG indicated to me that he retained a copy of the President’s letter. The DAG said he told the President [redacted]. The President then directed the DAG to write a memo explaining the reasoning for Director Comey’s termination and that the DAG should include Russia. The DAG said to the President he did not think this was a good idea and that his memo did not need to include Russia. The President replied that he understood, but that he was asking the DAG to include Russia anyway. As our conversation continued the DAG proposed that he could potentially wear a recording device into the Oval Office to collect additional evidence on the President’s true intentions. He said he thought this might be possible because he was not searched when he entered the White House. I told him that I would discuss the opportunity with my investigative team and get back to him.

We discussed the issue of appointing a Special Counsel to oversee the FBI’s Russia investigation. The DAG said he has two candidates ready one of whom could start immediately. [Redacted] The DAG said that he left a copy of the delegation with Acting Assistant Attorney General for National Security Dana Boente to execute in the DAG’s absence if the DAG were suddenly removed from his position. [Redacted] He anticipated that he may be terminated when he puts the Special Counsel in place, in light of the president’s anger with AG Sessions when the AG recused himself from the Russia investigation. The DAG further stated that he was told that others heard the President tell the AG “you were supposed to protect me.”

The DAG related to me that on Sunday, 05/14/17, the AG asked him to participate in the interview of [redacted] for the position of FBI Director. [Redacted].

The DAG told me that he informed the AG that I should remain in my role as Acting Director until the permanent Director was chosen. The DAG opined that my only “problem” was that some people believe that I was involved in my wife’s 2015 campaign for State Senate in Virginia. The DAG said it was a “credibility problem” because after having told him during my May 13 interview that I played no role in her campaign and attended no campaign events, the DAG said a staffer had provided him with a photograph found on the internet of me and my wife wearing Dr. Jill McCabe campaign t-shirts. The DAG suggested that this photograph contradicted my statement that I had not campaigned for my wife. I pointed out to the DAG that the photograph he saw was taken not at a campaign event, but rather at [redacted] I further informed the DAG that I confirmed with my ethics counsel at FBI that the Hatch Act does not prohibit wearing a campaign button or shirt away from the office, and that attending [redacted] wearing such a shirt does not constitute proscribed political activity.

Click here fore more on this at Judicial Watch