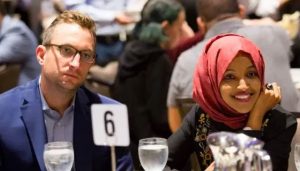 After paying over half of her political campaign’s spendings in 2019 to a firm that belongs to Democratic consultant Tim Mynett, whose wife accused him in divorce filing last August of having an affair with the congresswoman, Rep. Ilhan Omar shared some personal happy news Wednesday night on her instagram: She’s now married to Tim Mynett.

“Got married! From partners in politics to life partners, so blessed. Alhamdulillah,” she wrote in the caption, ending with the Arabic word that translates in English to, “Praise be to God.”

When asked late last year if she was having an affair with her political consultant, Omar told WCCO, “No, I am not.”

“I have no interest in allowing the conversation about my personal life to continue, and so I have no desire to discuss it,” Ilhan Omar added.

Federal Election Commission (FEC) filings released February show that Rep. Ilhan Omar (D-MN) paid over half of her campaign’s spendings in the last quarter of 2019 to a firm that belongs to Democratic consultant Tim Mynett, whose wife accused him in a divorce filing in August of having an affair with the congresswoman.

According to the FEC, between Oct. 1 and Dec. 31, Omar’s campaign paid a total of $217,000 to the E Street Group LLC for research services, digital advertising, fundraising consulting, travel, and other expenses.

Got married! From partners in politics to life partners, so blessed. Alhamdulillah ❤️